Why Russian Christmas is on 7th of January and not on 25th of December?

Christmas is the second  most important church festival after Easter for all Christians which commemorates the birth of Jesus Christ. In Russia is very religious festival , people go to churches at night . In the West its more family celebration when all members of it unite and have great fun . Russian great fun is on New year night  usually

So why we don’t celebrate it in one day ? Isn’t it strange ? Well ,this happens because of different calendars . The Julian calendar , introduced by Julius Caesar, was in operation since 46 BC , it  accumulated too many  extra days. for every 128 years, one extra day . Therefore, in the 16th century, the church faced the fact that Easter came too  early. And it was decided by the Pope  Gregory III to reform  the  calendar to make it more accurate with   astronomical times . He ordered to throw away 10 days from the  calendar and after ,  to throw away 3  more days  every  400 years in order to make calendar correct . He became the founder of Gregorian  calendar . All world accepted  it  as well as  Russia as the state  , but Russian Church ( which is separated  from the state ) refused  to accept it . By the way , Russian church consists of 15 equal independent  local churches  and 11 of them celebrate  Christmas on 25 Th  of December  , but Russian, Jerusalem, Georgian and Serbian churches follow Julian calendar  and celebrate it on 7 Th of Jan .  I am sure , that one day this situation will be fixed . 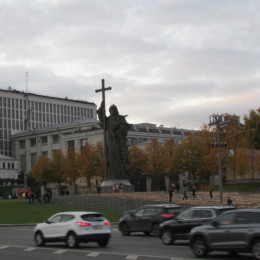