Russia is a huge country . From the East to the West, it extends for more than 10,000 km. Russia is also the most multinational country. Peoples with different traditions and religions have always organically coexisted on the same territory. Their cultures and cuisines were integrated and borrowed various elements from each other. That’s why Russian cuisine is so variate and  rich.

So lets talk about typical Russian foods and dishes cold and hot .

In the tradition of Russian cuisine, there have always been a lot of pickles, cabbage, tomatoes and mushrooms (salty or dried). Honey and jam were the main desserts in older times. Due to the harsh climate, people had to make preparations for the winter . Salt and sugar were the best preservatives. All these things were stored in special underground cellars including meat and fish.

For breakfast Russians eat porridge , or omelet , Russian Blini or Russian Sirniki ( cottage cheese pancakes) with jam or sour-cream, or just boiled eggs accompanied by coffee with milk or cup of tea .

For lunch busy business people take so-called “business lunches” . In nearly all restaurants we have special offer from 12pm – 16 pm. It is a set of meals for affordable price (around 5$ ) consisting of salad , soup , main dish and drink ( tea of coffee ). The portions are not wow big , but that’s fine if you in a hurry . You can expand it any time by adding something extra .
If we talk about home lunch , Russians like to have full program including dessert .

Lets start from typical Russian cold snacks and salads .Of course pickles and salty cabbage have very important place on Russian table because it stimulates appetite .

Salads ( so-called cold snacks)
“Olivier” salad, also known as “stolichny” or Russian Salad, was originally invented by Lucien Olivier for the Hermitage restaurant in Moscow in the 1860’s. it was then adapted

by Ivan Ivanov, who later sold the recipe for publication. Over the years, it gained in popularity not only in Russia, but throughout the rest of the Soviet Union and Europe.
Main ingredients are : boiled potatoes, carrots , pickles, green peas, eggs, meat or sausage , mayonnaise

“Vinegret” is vegetarian salad made of  boiled beetroot , potatoes , green peas , pickles dressed with oil .
Another interesting cold snack is “Seledka pod shuboi” in translation “Herring under the fur coat”. It is made of layers . The first one  – herring, then goes onion, grated boiled potatoes, carrot and boiled eggs , all this construction is covered by mayonnaise . It is very filling dish with lots of calories .

From the most famous Russian soups I would mention Borsh of course , made of beef or pork , beetroot , onion , cabbage (sometimes without ). It originates from Ukraine .

But there are still lots of interpretations of it : Ukrainian Borsh, Russian and Belorussian .We eat it with sour cream and small garlic breads called “pampushki”.
Another soup is Solyanka ( comes from Russian word “salty” ).

It is made of meat and sausages . The special salty+ sour taste it gets from pickled cucumbers , olives and lemon . We eat it with sour cream . Solyanka can be also made of fish . It is really nice thing to eat .

“Okroshka” is another soup . Cold summer one . Liquid yogurt or Kefir (sour milk drink) or Kavas ( drink , made from rye bread) , cold cooked meat , chopped cucumbers , boiled potatoes , boiled eggs and green onion . It can be so nice during summer when its very hot , wow .

Lets switch to Russian main course dishes  . Russians prefer to eat at home usually , unless they are in the city and have to get a quick snack because of a working day . But if we talk about Sunday family lunch, then the meal is very different . First of all , traditional Russian burgers ( kotleta) . It can be made of chicken , beef or pork . Baked or cooked on steam , or fried on pan, or even grilled . Those, who have time , make mince and do it themselves , but busy people can buy it in any supermarket in pre-made form . You need just to cook it . The biggest problem is that   pre-made burgers usually is made of not only  meat , but also bread .

And the amount of bread can exceed all “polite” limits to save on beef and pork and you never know what they added there extra . So better to cook it at home and  after yo store it in freezer . The ingredients are : beef, pork or chicken mince is mixed with fried onion, sometimes carrot , several slices of bread being in a cup of milk for a few minutes before are added to the bowl and mixed up . Spices and salt must be added on this stage also . Then you just make small balls and cook it . Voila .  In Russia people don”t eat it with bread  “fast food style” , we cook  garnish for it  . The garnish can be different from vegetables , rice and boiled potatoes or fried potatoes with onion till “grechka” (buckwheat groats ) . It is very popular in Russia .  Grechka can be cooked as a porridge , or separate garnish . It is incredibly good for health , there is even a weight loss diet called “Grechka diet”
.It contains many-many vitamins and  micro elements  , it can reduce sugar in blood  and so on .

Another popular in Russian cuisine hot  dish is Pelmeni ( Russian Dumplings ). It is very cheap , fast and nice  to eat for lunch . You can buy it in the shops , but also you can make it at home . It is not a big deal , trust me  . You just need a whole day for it ! Just one day of your life and you get full freezer of pelmeni for a year.

Next popular Russian dish is Beef Stroganoff  invented by count Stroganoff for himself , but later became world famous dish . It is made or Beef , mushrooms , onion with an adding of flour which makes gravy very thick and tasty .We usually eat it with spaghetti or boiled potatoes , or rice . It is also very popular dish in the country  .
Another dish Russians like is “Shashliki”( barbecue)  It can be from  pork or chicken, or lamb. Usually it’s a Pork neck pieces chopped in a “tennis ball” size or even smaller , being kept  in marinade for 4 hours minimum and after cooked on barbecue using skewers . It is very popular in summer .

Just imagine ! Saturday evening , Russian dacha ( summer country house ) ,fresh air , good friends around and barbecue with a glass of good wine . What can be more nice just tell me  . 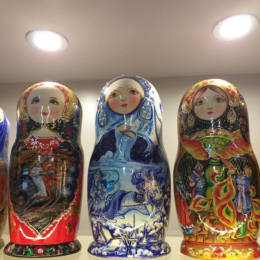 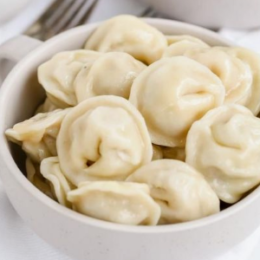 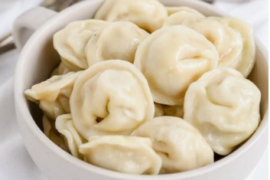